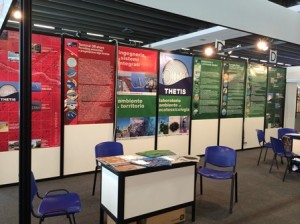 A successful presence of Thetis in Ferrara at Remtech Coast Esonda 2014. Thetis’s stand was visited by many people and by numerous exhibitors, all interested in various activities which the company develops in territorial, environmental field and in the field of civil engineering. Thetis spoke also participated in three separate meetings, one organized by OICE present with a stand at the fair and where Thetis had its own seat as we reported in a previous news.

According to organizers of the Remtech 2014 there were “four thousand visitors and 180 exhibitors from all over Italy, but also from China, from Ireland, England and Spain, who did score a +10% compared to the previous edition; foreign delegations from China, Russia and Brazil, from South Africa; four hundred of the world’s leading experts in sediment management and sustainable reclamation; over 100 Conference sessions on remediation, innovation, coastal management, the hydrogeological, materials from excavation, quarries, rehabilitation of architectural heritage “.

Satisfaction was expressed in a statement by OICE who led the participation at the exhibition of seven members: Ambiente sc, Sina Group, Italferr s.p.a., Spea Ingegneria Europea spa, Thetis spa, 3TI Progetti Group and VDP srl, “that they could gain important contacts for their business and start up new interesting initiatives”. The exhibition space is particularly distinguished OICE, getting excellent feedback to acclaim by organisers, exhibitors and visitors. La dott.ssa Patrizia Van and the Eng. Alfredo Iddrisu, Vice-presidents OICE and respectively for internationalization, did the honors of the House receiving guests and lending it to several interviews on the spot by the trade press and television magazines.